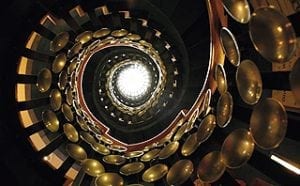 It’s a good question. What is The Magic Circle? Many have heard of it but not many know what it actually is.

Often when I’m performing at events as a close up magician, people will sidle up to me, look both ways, and ask me if I’m a member of The Magic Circle. I think they have heard about it but not exactly sure it exists. It could be a mythical place like Hogwarts or like the Masons with rituals to join. And even then, are you supposed to let anyone know you’re a member?

The Magic Circle is essentially a magic club. It’s been in existence for more than 100 years now (founded in 1905) and is, at heart, a collective name for a group of magicians who want to meet up. It’s a lot more than that too, but that’s the root.

To be a member, you have to be interviewed and examined by a chosen committee. It’s all very secretive.

The Centre of The Magic Arts (based in Euston, London), is a fantastic building and members of The Magic Circle meet there on a Monday evening. So what goes on inside? To be completely honest, it’s pretty much what you’d expect. Magicians chat about tricks, magic and about other magicians. Sometimes we have a magician do a lecture for us. Showing his latest inventions and teaching the methods. Sometimes it’s an interview with a magician about their life in magic. Like any club, the entertainment is varied week to week.

I’d heard about The Magic Circle as a child and it was always a dream to join. Not only am I now a member, I’ve now been made Associate of The Inner Magic Circle which is a degree that was awarded to me after I performed for their flagship show, The Magic Circle Christmas Show.

Can I go to The Magic Circle?

You have to be a magician to go to the meetings, but the building itself is available to hire for corporate events. They also put on many public shows that you can take your family and friends too. Usually you are treated to some close up magic, some stage magic, a tour of the building (which includes the museum containing tricks from famous magicians of the past and present) and a glass of wine. For more info, click The Magic Circle

What is The Magic Circle? was last modified: October 10th, 2016 by Alan Hudson
Comedy Magician or Funny Magician? A guide to comedy magic
Is a wedding magician tacky?

ITV’s The Next Great Magician

Website Copyright 2002 – 2020. Alan Hudson performs all over the world, from corporate events, weddings to house parties. Here are just some of the UK places you can hire him to perform as an on stage, after dinner comedy magician or close up magician with sleight of hand magic.