Yes, a comedy festival in Hull. Sounds unfeasible, but over the last few years the Hull Comedy Festival has really grown. Mel Foster and Martin Davies are at the heart of it all and do an amazing job organising such a mammoth thing. Bringing some of the top comedy performers from all over the UK including Sean Hughes, Carl Donnolly, Alan Davies, Gary Delaney, Jack Dee, Tony Law, Josh Widdicombe and loads of others. All over these will be in Hull somewhere between the 1st and 17th November. Have a look here at Hull Comedy Festival

I will be performing my show, Magician or Superhero? on November 8th 2013 that I did for the whole of August at the Edinburgh Festival. I’m in a venue called the Other Space, Alfred Gelder Street, Hull and tickets are here.

It’s a great show centred around me being a Superhero that never gets the big job from the commissioner. All the top heroes get the really big jobs (the like of Super, Spider, Bat etc – they’re the ones with the TV shows and the DVD deals), but there’s loads of us heroes on the circuit that you’ve never heard of, just hoping to get a big break (the circuit is just getting cats from trees and stopping old people from getting run over. Usual shit).

The idea is, as you’ve paid to come in you get to see my powers. And, maybe one day the commissioner will be in the audience and he might eventually give me one of the big jobs. I don’t want to be famous – a lot of the heroes can’t even walk down the street without been recognised. I just want to get to the next level…. someone like Aquaman – nobodies favourite, but he’s got respect.

This could well be (highly likely) the last time I’ll be doing this show as I’m already working on a new one for next year. So don’t say I didn’t warn you 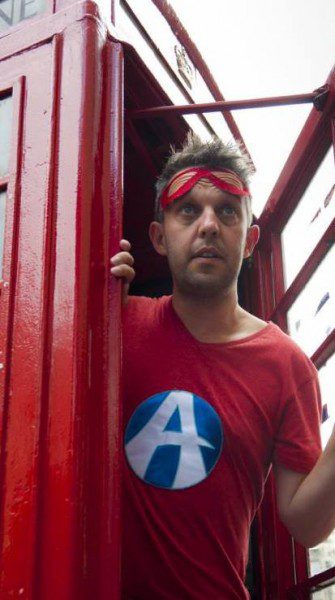 Hull Comedy Festival Magician was last modified: February 27th, 2015 by Alan Hudson
If you’re hiring a magician for your wedding here are Top 10 Tips you should read
I made this – Unusual way to do household chores