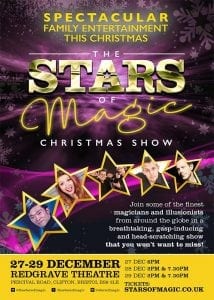 The Stars of Magic. December is the most magical time of the year. There’s nothing like a bit of magic for all the family to watch to warm the cockles. But where you ask? Good question.

This December 27th – 29th I’ll be performing in Bristol at the Redgrave Theatre for the Stars of Magic show. It’s the type of show I’d go and watch if I wasn’t in it. 5 different acts from all around the world performing their own very different styles of magic. It’s the perfect post Christmas treat especially if you are a bit bored of the pantomimes or have older children. You don’t even need children – you do need to like magic though. If you don’t, it’s probably not for you.

The Stars of Magic will have the following acts…

Young and Strange: Our grand illusionists and YouTube viral stars. One of their videos received ten million views in one weekend alone! Also, recently seen on The Next Great Magician. 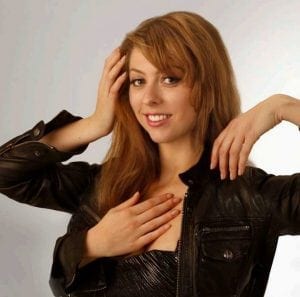 Alana: Enchanting, unique magic from Germany’s national champion. She presents the act that won her that title and that she has performed on television shows all over the world.

Anson Lee: Taiwan’s master of sleight-of-hand card manipulation. Anson has swept the board with awards in Asia for his cutting-edge act.

Rob James: The International Brotherhood of Magicians’ first prize winner for close-up magic 2015. Rob has amazed audiences everywhere from the Magic Castle in Hollywood to Disneyland in Paris.

And me of course