As avid followers of my career and this blog in particular (or more likely, you have stumbled here by mistake), you will know that I performed in the Magic Circle Christmas Show this year. Not only did it sell out for 7 days with 2 performances per day, it also received a fantastic critical response. Here is my part of the review from The Magic Circular – The Magic Circle’s official magazine. 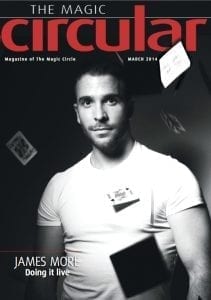 “I had previously only seen Alan Hudson performing very short spots so it was interesting to see him on stage for a longer period of time in what was my personal highlight of the show. Alan performed a selection of stand-up comedy magic and, for me, the most impressive element of his show was the way he combined strong magic with a lightness that made it clear he wasn’t taking himself too seriously. For example, a thimble routine that was performed smoothly and skilfully was not accompanied by an emotive piano background but rather with an acknowledgement that there is something ridiculous about a grown man fiddling with a thimble on stage. It didn’t make the productions, disappearances and transformations of the thimbles any less magical but it did make Alan far more likeable and interesting. Alan also performed a strong routine in which he determined the colour of balloons popped by a spectator whilst blindfolded and a charming variation of the Piano trick with two children from the audience”

The Next Great Magician

Website Copyright 2002 – 2020. Alan Hudson performs all over the world, from corporate events, weddings to house parties. Here are just some of the UK places you can hire him to perform as an on stage, after dinner comedy magician or close up magician with sleight of hand magic.