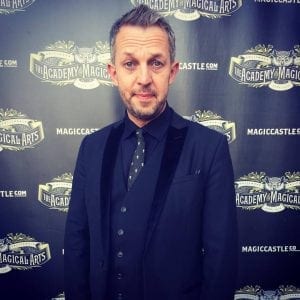 The Magic Castle is a members club in LA on Franklin Avenue (near Hollywood Boulevard). It is the most incredible venue and has the most amazing audiences. Full of the Hollywood elite and mixed in with magician members (they are easy to spot) it’s always a fun crowd to perform for.

I was in the Parlour of Prestidigitation. This favourite room at ‘The Castle’. As a performer you perform several times an evening. In the Parlour, you perform 3 shows an evening each lasting around 20 minutes. Audiences queue up to get in often the shows are full, so the anticipation levels can be high. It’s very exciting.

This time, I tried a new trick I’m working on. I get wrapped up in cling film by a member of the audience. A playing card is chosen and signed by a member of the audience. The cards are placed on the floor and then magic fire up in to air. This looks incredible. Once the audience get over the initial shock and look back at me, they see the signed card has gone through the cling film (or plastic wrap/Seran wrap as they like to call it in USA) and appeared on my chest. It was getting fantastic reactions.

I first went to Hollywood when I was around 18. You had to be 21 to get in to the Castle (alcohol laws). I remember thinking that when I’m older, I might be able to get in to watch some shows. I never dreamed I would actually be a Magic Castle magician.

The Magic Castle has several rooms to perform in. There’s a close up gallery for sleight of hand, close up magic. A larger theatre for stage performances and several other smaller interesting rooms of all shapes and sizes for different styles of magic. One of my favourite (non performing) rooms is the music room. A mysterious ghost, Irma, haunts The Magic Castle. She is invisible but plays the piano each night (for tips). Just name a song and she can play it. Absolutely amazing.

This is my 5th time performing at The Magic Castle and I always have a fantastic time. One thing I have observed, is the Americans can be a very different audience to the British. The Brits are typically reserved (as you’d imagine). The Americans are not only more enthusiastic but have a habit of talking to you and talking out loud during the performance. It always takes a me a few shows the get used to it, but it always makes me laugh. Whilst I’m performing you can hear people saying things loudly like “hey, you’ve got a bag on your head” or “thimbles?? Who’d think of doing a trick with thimbles??”. They don’t hold back their thoughts. I love it

Alan Hudson is available to hire for private parties and corporate events. You can have him perform amazing close up magic or a show for everyone (similar to the ones you’d see in the Parlour of Prestidigitation).

House parties can have The Secret Room. Alan sets a room aside in your house and guests come in a few at a time to watch his show. This is just like going to see the type of close up magic you’d see in the close up room. And the best thing is, there’s no dress code!

How do you hire a Magic Castle magician?

Hiring a Magic Castle magician for your event is a fantastic idea. Why should members get all the fun? Contact Alan Hudson to see how he can amaze your guests.