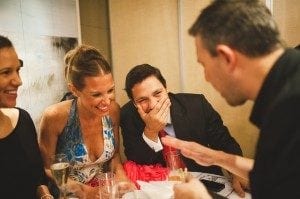 Most people have no idea how much magicians can cost. Many enquire with me and often just want to know the price. Obviously it’s fair enough to want to know if they can afford it. But price isn’t everything. It depends what you get for your money.

“How much does a magician cost to hire?”, “how much do magicians charge?”, “what is the cost per hour for a magician?” etc. Understandably people don’t book magicians everyday so have no idea as to how much they might be. But to just want a price on anything without knowing what is on offer is a bit shortsighted.

Most magicians don’t have prices on their websites for one main reason. It’s almost impossible to put a price list up because almost every single event is different. There are just too many variables (location, date and time, length, type of entertainment etc).

How much does a magician cost to hire?

When you ask, “How much does a magician cost to hire?”, many different factors come in to it. For instance, a Saturday evening could have a higher cost than a Monday afternoon. The magician in question may already have one job nearby that day and ‘doubling up’ (doing 2 jobs in a day) is always good, so could potentially offer a slightly cheaper price.

A peak date in December will be higher than one in January. Or maybe the magician will charge more or less depending on the location and on how appealing the job is. For instance, if it’s at Silverstone for Formula 1 weekend and the magician is a Formula 1 fan, they might be willing to drop the price a bit to get the job.

What is the cost of a magician?

So, how much do magicians charge? Most good, reliable professional magicians (ones that I’d recommend), tend to charge from around £400 – £1200 for close up magic (can sometimes be more in December, especially on peak days). There are a couple that charge a lot more than this – for instance TV magicians, but they are the exception in my experience. For an after dinner magic show for everyone, fees range between £750 – £2000.

Like all things in life, you can get cheaper. Magic has lots of wannabes and chancers like all professions. There is a Facebook group where people post magic jobs on for a staggeringly low £100 – £250 on average. Sounds good for the client, but unfortunately the people turning up doing the jobs (if they turn up at all!) just aren’t experienced enough. It’s like hiring a cowboy plumber or builder… the price is appealing, the result isn’t.

To see if Alan is available and how much he would charge for your event, CLICK HERE

How much does a magician cost to hire? Magician prices was last modified: February 3rd, 2020 by Alan Hudson
New promotional video 2010
Private Parties in the Secret Room