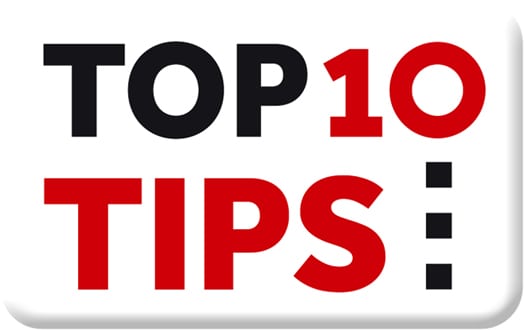 I’ve been a professional magician for many years now and in that time I’ve had countless discussions about the art (whether or not it’s an art is a huge topic by itself) of magic, the tricks and the business of magic. Every once in a while I’ll mention to another magician a tip or suggest a problem to a solution they might have. When they acknowledge that they’d never thought of that, I realise I’ve probably learnt more over the years than I thought. So, here, for free are my top ten tips for a professional magician. Some are obvious and common sense, some are not. Particularly if you perform at weddings, parties etc. They won’t make you a better magician, but they will make your performing life easier and your magic more enjoyable for you and your audience. If you can use any of these or think they might be helpful, or if you have any others I can add to the list, let me know through all the available social media channels.

1) Canapés. Every magician gets annoyed when they are entertaining a group and, just at the climax of their highly original Ambitious Card routine, only for everyone to turn away for a canapé missing the big finish. My solution is to arrive early and have a word with the waiters walking around with them, show them a quick trick or two and ask them to avoid your groups when they see you performing. This is a brilliant tip that saves no end of annoyances.

2) Notes. How many times have you turned up for a job and there are a LOT less people than you expected. A professional magician will be good at estimating the right length of time for a number of guests (I’d say approx, 40 guests = 1 hour, 80 guests = 2 hours on average). However, sometimes (and not through the fault of anyone in particular), you can go to an event that you have maybe been booked for around 2 hours only to find that there are a lot less people there than you expected. My solution – start a Notes file on your IPhone (most pros seem to favour the IPhone for some reason. Other phones will work fine I imagine. Although they won’t look as cool) with a bunch of tricks that is not normally in your A-List set but you can do at a moments notice. This has saved me so many times. For instance, Card Warp and Sneak Thief with business cards are both great effects that I don’t normally do but I definitely use them when I’m in this situation.

3) Payment. It’s not unreasonable to ask for payment on advance or on arrival. Many magicians think that invoicing after the event is the professional thing to do. In actual fact, for most private parties and weddings, payment on the day or in advance is their preferred method (this is different for most corporate events, although I still get paid in advance through the bank for about 95% of mine). Asking for payment on arrival means they can relax that they don’t have to carry around a wad of cash and also that you don’t get caught out should that person have to dash off or are in the middle of something else when you have finished. Early on in my career I would constantly be performing at a wedding breakfast only for the speeches to start unexpectedly early. I then had to wait for up to an hour to get paid because I didn’t ask for payment on arrival.

4) Dress Smart. I’ve tried lots of different styles over the years and one thing I’ve found out is that you can’t really go wrong with smart. I also perform in comedy clubs and cabaret evenings and I’ve recently discovered that smart is also best for these things too. I sometimes wear smart jeans for comedy events if I think it’s right for the situation (for instance a comedy club above a pub etc), but years ago I tried this at a corporate event and it did get mentioned. Never again. For corporate events and weddings, a suit is almost always best.

5) Card Tricks. As a professional magician, we tend to learn a lot of card tricks and we like them. Love them even. A lot. Much more than any other person in the world – unfortunately. The average person will enjoy a couple of great card tricks as long as they are peppered with other close up miracles. Use other objects such as mobile phones, money, rings etc. Switch it round. Just because you love that 10 phase Oil and Water routine, doesn’t mean your audience will. And it’s not about you, it’s about them. Don’t be selfish and you’ll find audiences respond to you better.

6) Arrive Early. If I ever book another magician for a job and he arrives late or arrives in a sweat because he didn’t expect that the M1/M25 etc wasn’t going to be really busy at 6pm on a Friday, I tend to not book them again. It doesn’t matter how good their ring and string routine is, I’ll always book a magician that arrives in good time. My usual rules are at least one 30 mins extra for every 1 of travel. For instance, 2 hours travel time (according to Google maps with travel switched on), allow 3 hours. Even then I often set off early. I’m much happier sat in my car in a hotel car park reading a book for a few hours than I am to arrive 1 minute late.

7) Weddings. Don’t make weddings the end goal. If you perform at lots of different types of events you are more likely to be better equipped at a wedding when you do one. I perform at comedy clubs and do my own show at Edinburgh Festival which gives me a chance to come up with new material, see a lot of other shows and meet other performers to get inspired. This means I don’t get bored. I never want to be one of those guys that’s been doing the same tricks for 20 years and it shows.

8) Souvenirs. One big problem magicians have is getting people to remember their name in the future (so they can hopefully get booked for future events). My solution to this is to do lots of tricks with my name attached. For instance, in my fork bending routine, I will put my name on one side and ask them to sign the other. My envelopes have my sticker on etc. There are hundreds of things you can do and it’s all beneficial to the audience. People love to take home magical objects – the fact that it’s got your name on is just a bonus for you.

9) Offer Advice. Magicians will sometimes ask me if I can do an event for them. Often when they tell me all the details I can tell they have just gone along with what the client has asked for, rather than offering professional advice. Most people don’t book magicians everyday and need guidance. Don’t be afraid of not simply saying yes to everything. People appreciate a bit of guidance. For instance, if they are having a private party for 10 people and they ask me to do reception drinks and then between the courses, this is a terrible idea. I would take over the whole evening – they wouldn’t get a chance to speak. This is where I suggest a 40 minute close up show, straight through either before starters or after coffee. People love to be guided by a professional magician who knows what they are doing.

10) Social Media. If you are constantly just taking pictures of empty dining tables and using the witty title ‘My office for the evening…’ you are just annoying people. No one cares. I’m not saying I get it right, but I’ve found that the people that do this type of thing have the least followers (unless they follow 10,000 people themselves and then pat themselves on the back because they have 10,000 followers. Or they’ve just bought some). Also, constantly just asking if people are wanting a magician is pointless too. If people are following you, they like you already (I assume). Try to be funny and creative. Maybe film a few tricks and put them up. Take a few pictures when you’re out and about. Think about how people you enjoy to follow do their twitter. Do you like to follow anyone that just brags constantly? Do more interesting things than just saying that you are performing at another wedding.

So there you go. Hudson’s top tips. Like I said, if you have any unusual tips that get help the other #workers – send them in. Good luck out there. It’s not easy