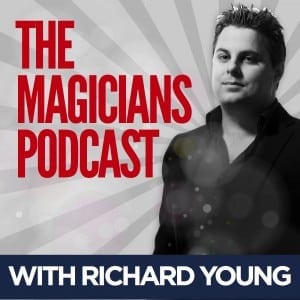 The Magicians Podcast is run by a fellow magician called Richard Young. Each week he will interview someone notable in the world of magic and although primarily aimed at magicians (upcoming, semi and professional), it can be of great interest for others too.

A few years ago, I had a very similar idea of talking to magicians and putting them out in podcast form. However, as with all good ideas, snooze you lose. Richard has done a fantastic job and interviewed some of the biggest names in magic. To name but a few, Jamie Raven (Britain’s Got Talent), Anthony Owen (Producer of Derren Brown), Andy Nyman (Actor and Co-writer of Derren Brown), Richard Cadell (Sooty’s right hand man), Ben Hanlin (ITV2’s Tricked), David Williamson (American magician who is most magician’s favourite magician) and Chris Cox (currently seen in Impossible in London’s West End).

I was very honoured when Richard asked if he could interview me. Being part of a group of people who are top in their field is very flattering. I talk about what it’s like to be a pro magician, my experience on Penn & Teller: Fool Us and my Secret Room idea. Like I say, this is mainly of interest to fellow magicians as their is a lot of industry talk, but here is anyway.

If you haven’t heard these before and you are keen on magic, I’d urge you to subscribe on ITunes (or whatever it is you use). A new episode every week and always a great listen.

Now all I have to do is think of a different format so I can do a podcast. Ideas on a postcard please…

Btw – you may have seen Richard recently on the socials with this funny hijack video of Sky News. He’s the little one

The Magicians Podcast Interview was last modified: August 16th, 2015 by Alan Hudson
An open letter to reviewers of magic shows
It’s the way you tell em