British illusionist, Alan Hudson, has performed on Britain’s Got Talent, ITV’s The Next Great Magician and the British version of Penn & Teller: Fool Us. He’s also a Gold Star Inner Member of The Magic Circle – one of the oldest magic clubs in the world with its headquarters in England.

Alan Hudson performs a virtual magic show online for companies all over the world. Until last year, if you wanted to hire a British illusionist like Alan, you’d have to fly him out, give accommodation etc. Now, with an online virtual magic show, your work colleagues can be completely amazed and entertained without leaving their house.

Click on the link for more details on the online Zoom virtual magic show.

A Zoom British Illusionist like Alan Hudson is the best person to make sure your online events are amazing! Not only will he provide you with a virtual press pack so you have plenty of content to make your Google invites sound exciting and get lots of RSVPs, he’ll also make sure it’s one of the most incredible Zoom calls people have ever taken part in.

The show isn’t just a show. It’s interactive. Your colleagues get to take part in the magic and will maybe even get their mind read!

The virtual magic show can last up to 45 minutes. Usually people go for a 30 minute show and sometimes, if it’s part of lots of other things, Alan go perform a shorter 15 minute version. The 45 minute show also includes a simple magic that is taught to everyone so after the show, after will be able to do a brand new magic trick on their own calls for their family and friends. It also includes a magic trick that will happen in the hands of everyone at home. Amazing!

Alan Hudson is also one of most popular, funny magicians performing live on stage in the UK. See on Britain’s Got Talent and other TV shows, he’s the perfect after dinner entertainment.

He’s performed for hundreds of companies, all around the world on stage with his comedy magic. Like the Zoom show, your guests become the stars of the show. He will read their minds, make their rings/wallets/watches disappear and appear again (if you’re lucky) and it’s all performed with hilarious comedy perfect for a corporate audience. 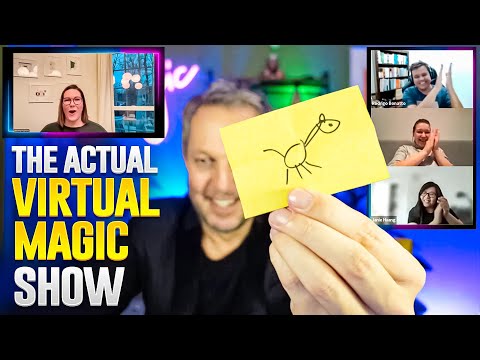 The term ‘illusionist’ is actually a word used by the public to describe magicians. Magicians tend to use the word ‘illusionist’ to describe someone who performs large scale tricks (or illusions as we call them). Such as David Copperfield. He would classically be known as an illusionist. However, as language changes over the years, many people say Derren Brown is a British Illusionist and he is primarily a mind reader.